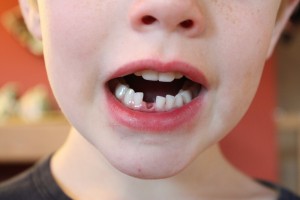 So my 5 year old lost his first tooth and boy was it exciting! He got a little plastic junky tooth box from the dentist, that was promptly lost in the shuffle. I thought he would be really upset that we weren't able to find it so I decided I'd try and make a solution. I'm the kind of Mama who would prefer to make things rather than buy them, but of course that can't always be the case. Today it was. 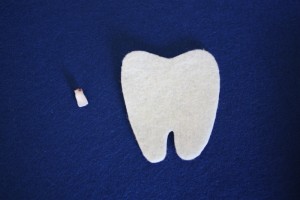 I have some 100% wool felt that I use for random projects - some of which you'll see on here from time to time - but this seemed like the perfect opportunity for me to use a little bit of felt. In hind site, I might have used something else (for the bag), just because the drawstring didn't work as well as I would've liked it to...I think because the felt is so thick, but it holds the big bucks in so I guess it doesn't matter. 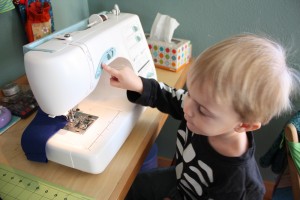 This is just one of my helpers...I have two little boys and Gus decided that he'd help me make RaRa's (aka Simon's) tooth bag. Of course that meant that he'd need a bag of his own as well...so we stitched one together for him. 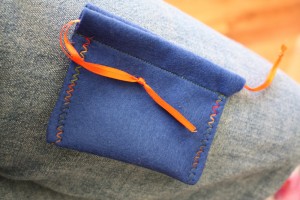 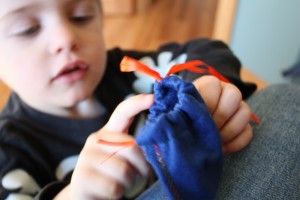 This is Gussy's little bag - he told me he would put rocks in it. I used variegated colored thread and just a zig zag stitch on the outside. This is after I'd already straight stitched from the reverse. I'm pretty sure the thread is just cotton. I bought a handful of different variegated colors when they were on sale at Joann's one day, so I have all kinds of variegated goodness to choose from. And my sewing machine (who just turned one about a week or so ago) has all kinds of fun stitches. I'll feature my machine in one of my next posts.

Simon's tooth bag has a tooth on it and the tooth on the top is open on the one end so he can put his lost tooth inside and the tooth fairy doesn't have to wonder where that little bugger might be. There is plenty of room inside the bag for the loot. I ended up stitching a few colors of felt together for Simon's tooth bag just to give it a little bit of character. I also thought his favorite color was blue but found out it had changed (that day) to green when he got home. Oh well...luckily he was still pleased as punch with his tooth bag. 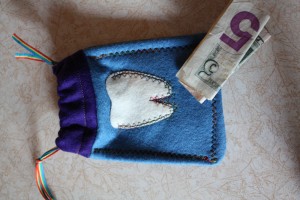