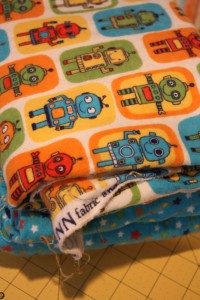 I was looking for some simple cotton fabric, and of course I couldn't resist the cotton robot flannel. I wanted something soft that I could use on the outside of a rice bag. I also got some muslin to use for the insides.
I have a kiddo that is prone to ear infections and finally after a couple of years I realized it might not be the best idea to have him sleep with a heating pad. Not sure why that took me so long to figure out as I'm generally a Mama that is pretty careful about all kinds of environmental invasions.

Anyway I decided to sew the heating pad alternative, and my boys are way into the creation. The supplies are simple. Some muslin (I chose the unbleached version), some cotton flannel, some rice (or flax seeds) and thread of course. 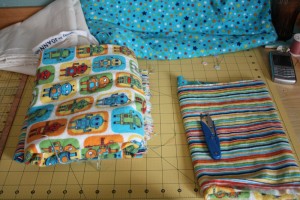 I chose a few different soft flannels to make the "pillowcase" as colorful and fun as possible. I stitched them together slightly differently so we could tell them apart. A 4 and 6 year old don't like to share rice bags with one another. 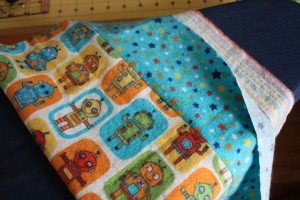 But they still want what the other one has. 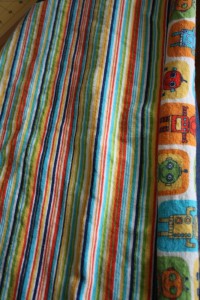 I did a little bit of "fancy" finishing on the edges of the pillowcase. I really just like to play with the different stitches on my machine. 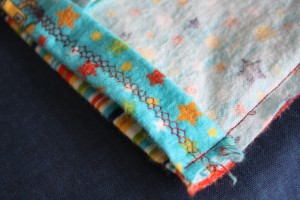 Yay for robots. And stripes of course...who doesn't love stripes? 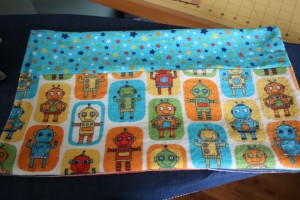 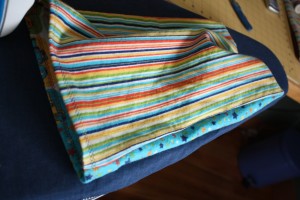 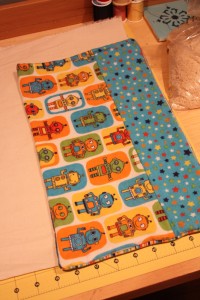 Now for the muslin. I decided to contain the rice in the muslin and have a cover that I could wash since this would be a common companion in bed and probably often when feeling a little bit under-the-weather. Washing was important to me. 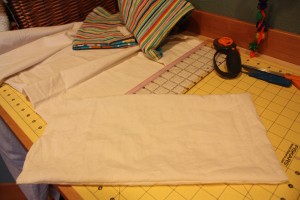 I just did a simple triple straight stitch around this muslin liner for the cuddle bag - rice is heavy and I wanted to be sure it wouldn't bust apart.

Next step was to funnel the rice in. I left a small opening along one of the edges of the muslin bag so I would be able to sneak some rice in. 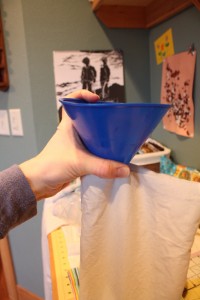 I filled the cuddle bags to different levels (only slightly different) but I was careful to not make them too full so they would be rock hard. I wanted them to be soft enough for a little head or ear to lay upon. I think I was successful, and surprisingly I used a lot of rice even though I didn't fill them full. I think the muslin bag probably measured about 8"x12" - just to give you a size idea. 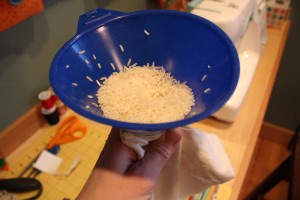 I triple straight stitched the opening and slid the muslin rice bag into the flannel pillowcases and tada a cozy cuddle bag.

I warm them in the microwave for a minute, or together, for 2 minutes. They hold their heat a surprisingly long time. I put some Lavender essential oil in each of them along with the rice and I like to drop oils on them (the muslin part) whenever the need arises. Of course if you don't have a microwave you can always warm them in your oven.

One Response to "Cuddle Bags"